It WASN'T a month, I still had a few hours left! 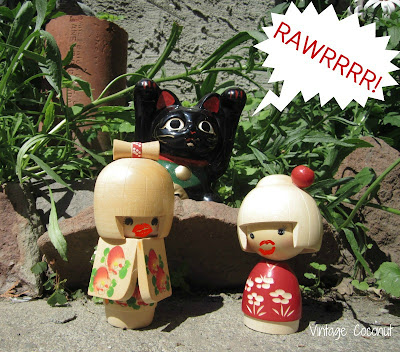 Hello Hello! I suppose it's been a short while since I last posted. But I made sure to get my butt here typing before I reached a month.
(The lucky cat piggy bank and kokeshi doll in the red dress were purchased from the flea market 2 weeks ago for $5. The kokeshi in the floral kimono was purchased from a thrift store last week for $1.50)
I suppose my little absence will be blamed on some part time work that is newly acquired plus the fact I am trying to incorporate daily exercise in my everyday life. In recent months I fabulously (not) gained extra pounds that are not wanted!!! And I am trying to rid them off my body! Trying to get into a workout routine is never the easiest,  but I am doing better with it now than I was weeks ago.
Also Weekends prior to this last one were HORRID for sales!! I had two Sats in a row where it just poured rain. Sales were cancelled or just not there at all!!! 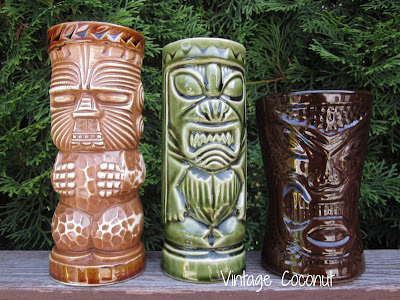 "OOGA BOOGA MOOGA" I found these three tiki dudes at the flea market on Sunday. The seller had the bottoms marked $2 a piece but told me she would take $5 for them "without me even asking?" So I said "How bout $4?" She told me she would do it but then showed me a Tiki bottle cap remover ... So I said alright throw that in and I will pay you $5. She agreed and I was thrilled (Also saved myself $3) *heh*

Two Christmases ago my Mr. wanted to buy me a IPhone (I politely declined) and chose a WAY cheaper pink flip phone. I am not a big cell phone person
(I use them when I need to make a call or a short to the point text) ... but I do not like to be on them constantly. And get annoyed by people who are.)

This is seriously one of my pet peeves. I swear half the world is missing out on (actual life) .... because their face is plastered to their phone screen.
I just want to make sure I am never one of those people who would not know what to do with themselves if they didn't have their phone.

(If you are one of those people ... Since I don't know you IRL)
Don't take offesnse to my rant! *lol*
The time came where my previous cell just wasn't cutting it for what I want.
I wanted to be able to look up things I come across in thrifts and at garage sales to find out more info on them. I get Mr. to do it from his phone when he's with me but the times he's not I am wishing he was. *lol*
So finally I gave in to the hullabaloo!! But first before even getting my phone I looked through countless phone cases *hehe*
I ordered 2 before I even went and got the darn phone.
Here is my first case 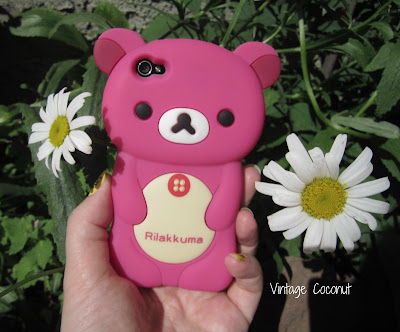 Rilakkuma a Japanese character! My second case which has yet to arrive is Hello Kitty, I am getting antsy waiting but I am sure it will show up soon. I was very ho-hum about getting a IPhone but  now that I have had it for a couple weeks,  I have taken a liking to it. It really makes looking up stuff when I am out super easy. Also there is tons of things to do on it if boredom ensues. I am just making sure to "limit the amount I am on it whilst out in public, I don't want to turn into a IPhone addict."

I was planning on writing this post on Sunday but then didn't get around to it. I was reading blog posts though and one of them gave me Deja vu!
Lucy Nation
She also just got a IPhone very recently AND  ....... *cues eeeerie music* Loves Hello Kitty!!!!
Go check out her awesome blog if your looking for more Happiness to read. 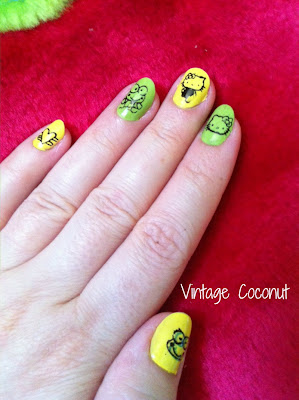 (IPhone pic)
I ordered nail stuff from E-bay
And did my nails Keroppi & Hello kitty! 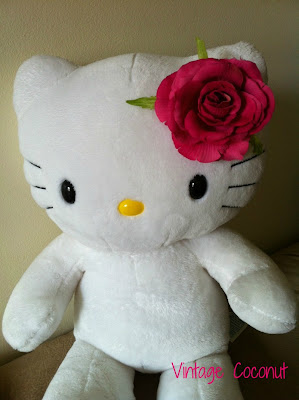 (IPhone pic)
This was my FAVORITE find garage saling on Saturday!! $3 for a Hello Kitty Build-a-bear.
She was naked when found and missing her bow "So I lent her a flower" But no worries I plan on ordering her some clothes soon!

The people holding the garage sale where I got Hello Kitty from were a Senior citizen couple.
The man had to be in his late 70s early 80s and I would imagine the woman to be in her early 70s.
I have been to sales by them in previous years and I usually always find something.
Mr. Coco and I start walking up the driveway. The man hosting the sale is just staring at me with this weird gaze and a big smile. (I was sort of worried I had cream cheese from my bagel on my face or something.) He then gets up right next to me and says loudly "GRAB YOUR PURSE AND BAG, FORGET ABOUT THIS GUY!! *looking over at Mr. Coco*" Apparently he thought him and I should run off together. *bahaha* I was slightly caught off guard and couldn't stop laughing!
(His wife then tells him his toast & jam is on the table and that he should go eat breakfast, so he goes inside the house)
*Minutes later*
A middle aged "hippie" looking man comes up the driveway and asks if she has any watches to sell.
She tells him no politely and then he explains he likes to buy old watches and fix them up. He then asks her is she has any old toys and rambles off a list of the types he looks for. The woman's reply was "Sorry: I'm the only old toy we got around here" (Said in a flirty manner as her Husband eats his toast while peering through his kitchen window.)
*hahaha* 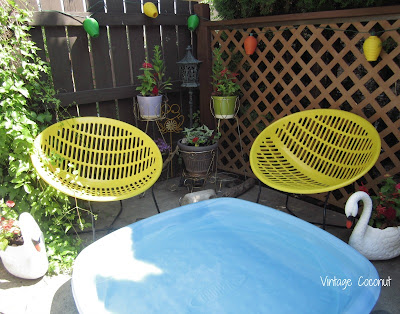 This evening I am going to relax with my feet in Jersey's doggie pool. (FINALLY getting hot weather here.) I cleaned it and filled it yesterday so it will be warm enough to give him a bath this evening.
(It's so much easier bathing a dog outside.)
He doesn't really like baths so I have been spoiling him a little here and a little there .
For some reason he's CRAZY about watermelon. He snaps at it like a little shark!!
So I gave him more than I normally would but then realized.... if he had any more... I might regret that decision when it comes time to clean up the chocolates he leaves in the backyard.

See the collar I made him!!
Oddly enough I think he likes wearing a rind around his neck! 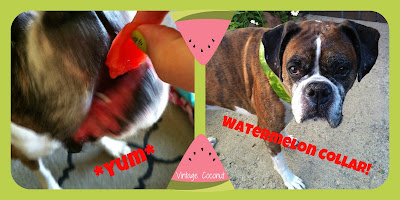 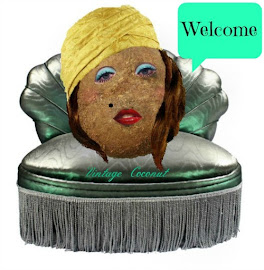 Vintage Coconut
This place is where I will blog about my recent thrift & garage sale finds. Plus random things in my life. * I am a lover of vintage things. * I like to sew and hope to get a heck of alot better at it. * I love animals and nature. * I love to wear vintage clothing and am slowly building my vintage wardrobe. It isn't the easist thing finding clothes from decades past that are your size. So it takes awhile. You can contact me at: VintageCoconut@gmail.com 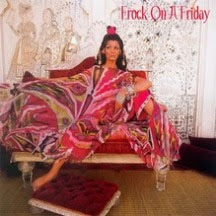 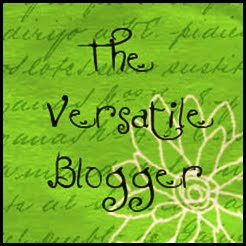 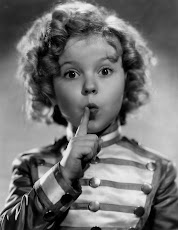 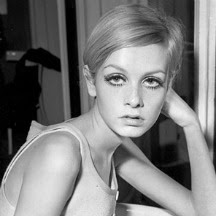 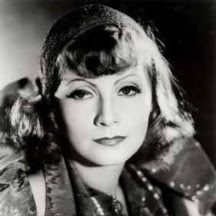 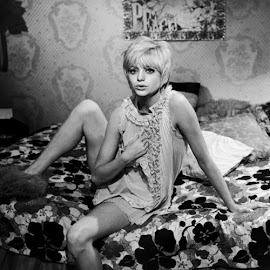 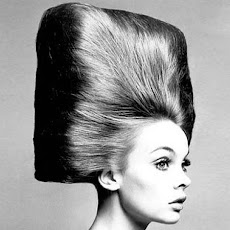 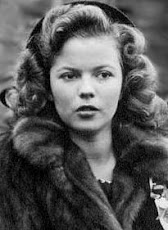